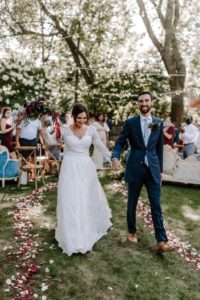 Last October, Finkenauer and Daniel Wasta, who was working at the time as presidential candidate Elizabeth Warren’s Iowa political director, got engaged. Finkenauer congressional office announced Sunday morning that the two had married Saturday, at the couple’s home.

According to the news release, “a small group of family members and close friends attended the socially-distanced, outdoor ceremony while many more joined via a livestream.”

Finkenauer, a 31-year-old Dubuque County native, was elected to the U.S. House in 2018. Wasta, who now works as Joe Biden’s Iowa director, is a Cedar Rapids native. Finkenauer’s office announced the couple will make their home in the first congressional district, but did not specify where.