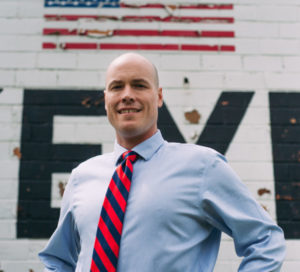 The Democratic candidate for Iowa’s 4th district congressional seat has a new twist on campaigning during the Covid era. J.D. Scholten has equipped his “Sioux City Sue” RV with special equipment so he can hold parking lot rallies.

“I know a lot of churches have gone this way,” Scholten says. “We’re going to have a site where people can go and drive to and if they just want to stay in their car and tune in on the local frequency that we’ll be broadcasting, they can do that. Otherwise they can come out of their cars and just make sure that they’re socially distant.”

The RV will have speakers, so those who stand outside the R-V will be able to hear, along with those tuned-in and sitting in their vehicles. Scholten is planning to visit all 375 towns in the district before Election Day.

“We are taking extra precautions,” Scholten says. “Wear a mask. We’ll have a lot of hand sanitizers and things like that.”

This is Scholten’s second run in the district. In 2018, he narrowly lost to Republican Congressman Steve King. In 2020, he faces Republican Randy Feenstra, who defeated King in the June 2nd GOP Primary. A recent poll suggests Feenstra has a comfortable lead in the district, which has a significant Republican voter registration edge.