You are here: Home / Human Interest / Temporary seating at MLB site for ‘Field of Dreams’ game being removed 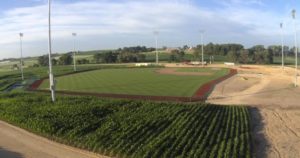 The stadium seating Major League Baseball set up at the new field it built at the  “Field of Dreams” movie site in Dyersville is coming down – for now.

Last week, crews began removing the temporary stands that had been installed for an August 13th match-up between the Chicago White Sox and St. Louis Cardinals. Last week, Major League Baseball announced the game will be postponed until 2021. Roman Weinberg, manager of The Field of Dreams Movie Site, said they knew rescheduling the game was a possibility since the pandemic began in early March.

“We’re looking at the silver lining,” he said. “MLB is obviously trying to postpone it for next year so that’s our goal: for 8000 fans to be in that stadium next year and for the event to be held as originally envisioned.”

Weinberg indicated the plan is to rebuild the stadium, starting next spring, for next year’s game.

“We’re excited, looking forward to it,” Weinberg said, “and right now just focusing on getting past their hurdle, this pandemic, making sure that the safety of our fans and our staff is consistently staying in the forefront.”

Murray Cook of BrightView, the company Major League Baseball hired for the stadium work, told the Dubuque Telegraph Herald much of what was used to construct the stadium was rented and it’d be too expensive to keep it all intact until next year.

Meanwhile, in downtown Dyersville, a new museum honoring the Field of Dreams has just opened. It’s called the “If You Build It Exhibit” and it highlights the making of the 1989 film. Weinberg was on hand for the museum’s ribbon cutting.

“It really is a pleasure to see the pride the community has and the care for the field. You can see it,” Weinberg said. “…It’s been a long time coming and definitely does the field justice.”

A mural on the side of the building featuring the Ghostplayers coming out of the corn. The Field of Dreams movie is based on the 1982 book “Shoeless Joe” and the field constructed outside of Dyersville for the filming of the movie has been maintained as a tourist attraction.