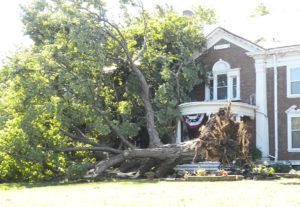 A tree down in Des Moines.

Governor Kim Reynolds said late this morning that hundreds of thousands of Iowans remain without power a day after the derecho storm with hurricane-force winds swept through the state and it may be “several days” before service is fully restored.

At mid-day, the governor indicated an estimated 450,000 Iowa homes and businesses had no electric service.

“At our peak last night, there were 550,000 households without power,” Reynolds said during a news conference at Iowa PBS. “Linn County had 97% without power at one point, as well as Marshall County.”

The power grid has been “seriously damaged” in Linn, Marshall and Scott Counties, according to the governor.

“For example, more than 22 of the large, lattice transmission towers were directly impacted,” Reynolds said. 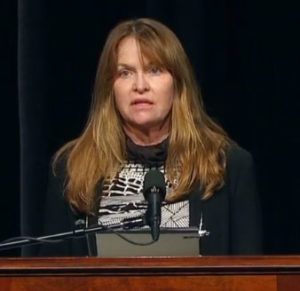 Iowa Utilities Board chairwoman Geri Huser said service will be restored as soon as utility companies can safely do so.

“Some areas of service can expect to be without power for several days as debris is cleared and downed power lines are replaced,” Huser said.

Iowa utility companies are activating their mutual aid agreements with utility and tree companies in other states, to get more crews into Iowa to deal with the situation.

“Utility companies have reported to the IUB and have indicated that the storm damage was one of the most destructive of record,” Huser said during the governor’s news conference.

Alliant Energy has announced service to neighborhoods, industries and businesses “will be restored systematically” and the company’s first priority has been getting hospitals, nursing homes, fire and police departments and water systems back online.