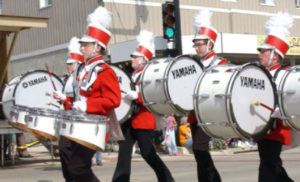 “It’s really tough decision because it’s such a fabulous event for the community, for our kids and all of the participating schools,” he says “but our ability to house that number of schools and their teams — it’s just not something we can safely do that this time.”

The event, which has been held annually for the past 71 years, features a parade during the day and a marching band competition at night on the Algona High School’s football field. Algona Chamber of Commerce Director Vicki Mallory says the parade portion of the Band Day Festival presented its own set of problems.

“It all comes down to the safety of everyone involved,” she says. “We’re very disappointed, but we’ll come back next year bigger and better.”

The Algona Band Day Festival has a traveling trophy that goes to the band with the highest scores from the field and street competitions. It is scheduled the week before the Iowa High School Music Association State Marching Festival. That event has been cancelled as well.