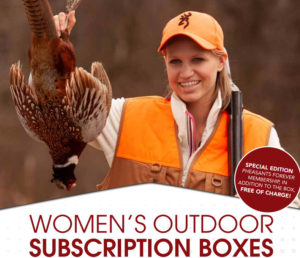 The Iowa Department of Natural Resources has teamed up with its counterparts in Nebraska and Kansas to offer outdoor subscription boxes for women.

“We were getting together and we knew we had this growing target audience — we know that women were coming onto the landscape in a much higher percentage in hunting and angling and the shooting sports,” according to Wisecup. “And we wanted to really start taking a look at that audience and seeing what we could do within our region. So, looking at Kansas, Nebraska, even the Dakotas, Minnesota, Missouri and started talking about ways we could better serve this audience.”

She says the discussions has started before the pandemic — and after it hit they saw how subscription boxes were being used and decided to give them a try. “It’s been kind of a popular thing you see with all the food, the wine, the beer club of the month kind of thing, so could we do the same thing with an outdoor skill, and it kind of took off from there,” she explains.

Wisecup says they worked with the Becoming an Outdoors Women, and Women in the Outdoors groups and the first subscription box involved pheasant hunting. “You are going to get some information on pheasant hunting in general, you’re going to get blaze orange gear that you would need to wear and that is required in our three states when you are out hunting. Game shears, a knife to use for field dressing, and a shotgun cleaning kit,” Wisecup says.

She says the cost of a “She Goes Outdoors” box is $50 and says you get items in the box worth more than that fee. “One of the other cool things about the subscription box is we are also going to pair it up with a virtual seminar,” Wisecup says. “Everyone that purchases a box, we are going to post a virtual seminar here later in October and teach you how to use everything that’s in the box — and then also go on to talk about some of the others skills to get out there on hunt.”

Wisecup says they will offer new subscription boxes every quarter. “On thing I want to point out — even though we are calling it a subscription box — it’s not something that you’re making a commitment to. So, you can pick and choose which skills or which box you’d like to purchase and just purchase that one directly. You are not signing up for something that you have to do for six months or a year,” she says.

Wisecup says a variety of things have led to more women getting involved in these activities. “Changes in interests and opportunity and just having the ability to get more folks out there in the field,” Wisecup says. “And even as a professional in the field we’ve slowly started to see this demographic change too — where being from predominately male-dominated field in the conservation area — to seeing more women getting involved in that.”

Orders being accepted for the first box through August 14. You can do to the DNR webpage and find the link to sign up.