You are here: Home / News / State Climatologist among those dealing with damage from Monday’s severe weather 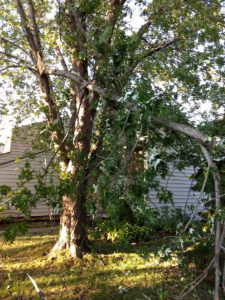 State Climatologist Justin Glisan and his wife were working from home when Monday’s storm rolled through the Beaverdale neighborhood in Des Moines.

“We call it a derecho. It’s literally a wall of wind,” Glisan says. “This is the most frightened I’ve been in my life.”

The wind blew a neighbor’s huge maple tree into Glisan’s house, sheared off the gas main and pushed into the foundation.

“We had a gas leak downstairs, so we had to leave,” Glisan says, “get out of the house with our dog, George, and get into a car and we drove to a parking lot that was free of large trees and just had to wait it out because we didn’t have anywhere else to go.”

The first storm warnings were issued yesterday morning for western Iowa, with wind speeds reported between 60 and 70 miles-an-hour. The winds picked up speed as they moved through the state, with a 99 mile-an-hour gust recorded in the Marshalltown area.

“Once you get a squall line like this to stay together, it just perpetuates itself,” Glisan says, “and that’s what happened.”

Monday’s storm is a reminder to heed National Weather Service warnings, according to Glisan.

“These events can get severe really fast and it can impact life and property, as we’ve seen across much of Iowa,” Glisan says.

Many communities in the path of the storm asked residents to stay home, as crews removed storm debris and power lines from streets and roads. By mid-afternoon Monday, more than 420,000 Iowa homes and businesses had lost power according to the National Weather Service.