You are here: Home / Fires/Accidents/Disasters / Thousands still without power as utility crews scramble to make repairs 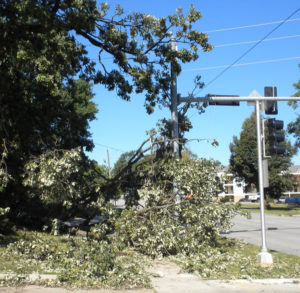 A tree limb that pulled down utility lines in Des Moines.

Several thousand utility workers are fanned out across Iowa, trying to restore electricity to more than 400,000 people who still don’t have it after Monday’s storm. MidAmerican Energy says 200,000 of its customers remain without power.

Spokeswoman Tina Hoffman says it could take a couple of days to restore everyone. “There is so much tree damage and in addition to line crews, that we have ready to do that work, we have tree crews that sometimes have to go before them to get debris cleared out of the way, get the trees off lines, those kinds of things,” Hoffman says, “so it’s really a layered process.”

Hoffman says utility crews from as far away as Colorado are helping, with more on the way. She says all of MidAmerican’s crews are being called back to Iowa. “MidAmerican has crews helping out on the East Coast as well from last week’s storm,” she says. “We’ve called those crews back because things are looking a lot better over there and obviously, we have outages and our customers need those crews on the ground here.”

Hoffman says some customers might be without power for a couple of days — and they should treat all downed wires as if they’re energized. “Stay away from those lines,” Hoffman says. “If there are trees on them, our crews will take care of those things. Customers should not try to handle those things on their own.” Alliant Energy says about 210-thousand of its customers are without power this  morning.

In Cedar Rapids, officials imposed an overnight curfew so crews could work safely to clear trees and other debris from city streets.