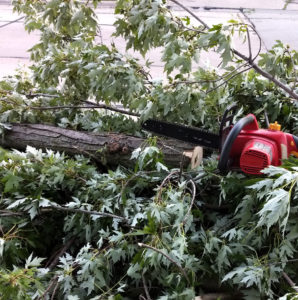 The Derecho that plowed through Iowa Monday caused significant damage in the Marshalltown area, a part of the state still recovering from the 2018 E-F-three tornado.

A 99 mile-per-hour gust was reported at the Marshalltown Airport as the winds and rain inundated the community, damaging not only buildings and houses and trees in downtown Marshalltown, but throughout the community and beyond. But like two years ago, Marshalltown Police Chief Mike Tupper says when it came to people, no lives were lost.

“We got through another one without any significant or minimal significant injuries,” he says. “I know that we had one person injured during the storm fairly seriously.”

Two years ago, the historic Marshall County Courthouse took a direct blow from the tornado. Renovation is work has been ongoing, with workers on scaffolding to repair the courthouse exterior. County Auditor Nan Benson says all the workers made it to shelter in time.

“We were able to get all the workers off of the scaffolding around the courthouse. Surprisingly, it’s like we knew it was coming, but I don’t know if our construction folks were not paying attention to the weather, but luckily everyone was off the scaffolding, so there were no injuries there. There were pieces of scaffolding flying around during the storm.”

Marshalltown Aviation General Manager Steve Valbrecht says damage was minimal at the airport, despite that 99 mile an hour wind gust.

“We did have some damage to the buildings out here, as you can expect (with) metal buildings — roofing and collapsed hangar doors,” he says. “And one hangar door that actually left the hangar. There wasn’t any damage to any airplanes that we can find yet.”

As of Monday night, the promise of power returning to Marshalltown, as well as Ames and other central Iowa communities was not known, but for some areas it could be days.