You are here: Home / News / Governor says Marshalltown derecho damage may be worse than 2018 tornado 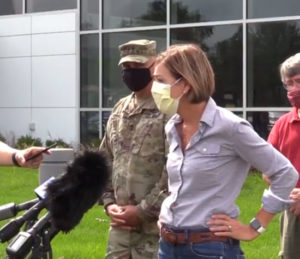 A quarter of a million Iowa homes and business are still without power this morning. Ames residents have been warned damage is so dense and significant, power may be out for a week in some areas.

Governor Kim Reynolds toured Marshalltown Wednesday afternoon and told reporters the damage she saw may be worse than the devastating tornado that hit Marshalltown two years ago.

“Just from a mental perspective of trying to deal with all of that, it’s just tough,” Reynolds said. “They’re hit pretty hard again.”

The governor has gotten an aerial view of crop damage this week and she visited a grain elevator that was critically damaged. With silos and bins smashed in areas that were hit Monday, Reynolds said storage for this year’s crop will be a significant issue.

“There’s no way that they’re going to be able to rebuild the bins this fall — materials, construction — I mean, just across the board it’s not going to happen,” she said.

Iowa Agriculture Secretary Mike Naig told reporters on Tuesday that farmers may have to resort to open-air storage — piling the grain on the ground.