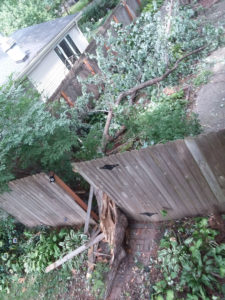 Trees were blown onto fences, cars, power lines and everything else in Monday’s storms.

Agents with Iowa’s largest home insurer are working plenty of overtime this week, trying to prioritize and process claims from clients who had damage to their homes, cars and other property in this week’s derecho.

Mark Doyle, a State Farm agent in Ames, says he’s had 450 claims filed since Monday, ranging from blown-over fences to homes that were totaled by the extreme winds and toppling trees.
“Typically, we’ll get a hail storm that rolls through and it might touch on part of the town,” Doyle says. “This thing really just hit all parts of the town and all over. Half of Iowa got hit by this thing.”

Statewide, the company’s claim count for this storm is over 13,000 and rising, which Doyle says is significantly higher than an ordinary severe weather event. The wind storm boasted gusts as high as 112 miles-an-hour and it caused destruction across Iowa’s midsection and well into Illinois and states further east.

In central Iowa, Ames was particularly hard-hit, including Doyle’s office, which compounded matters. “We had no power, we had no phones, we had no ability to forward those phones on to the 24-hour service, so we had a little delay in being able to get to people,” Doyle says. “We staged in my home because I did get power the next day.”

Much like a hospital’s emergency room has to determine which patients are in the most life-threatening condition and need to be seen right away, Doyle says they’re working to prioritize insurance claims.

“We’re going to take all of those people that have the severe losses, where their home is uninhabitable, they’re going to move to the front of the line,” Doyle says. “We need to take those displaced people and get them dealt with immediately. If someone has a tree on a fence in the backyard, that’s probably going to go to the back of the line.”

For Iowans with storm damage, he says to take pictures or video, and prevent any further damage by making temporary repairs. Save receipts for tarps and materials and start the claims process online, on the app or by phone. When hiring a contractor, get multiple estimates in writing and don’t pay for any work up front.