You are here: Home / News / Pence says he was ‘taken aback’ when he heard of derecho’s damage

Vice President Mike Pence is on a campaign swing in Iowa today, starting at a rally on the state fairgrounds to launch the “Farmers and Ranchers for Trump Coalition.

Pence addressed the widespread devastation from Monday’s derecho during his speech. “I must tell you when I heard about this storm, as a lifelong Hoosier, I was taken aback to hear of the magnitude of this storm and its impact,” Pence said.

Pence, the former governor of Indiana, did not talk about what specific federal relief may be headed Iowa’s way, but made a general pledge.

“On behalf of the President of the United States and our administration I want Iowans to know we are with you. We are going to stay with you and we will work with your governor and your senators to make sure that we bring Iowa all the way back, bigger and stronger than ever before,” Pence said, to cheers. “I promise.” 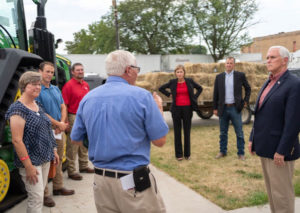 Before the event, Pence met privately on the fairgrounds with half a dozen Iowans whose farms were hit by Monday’s derecho. Rod Pierce of Woodward was among the group.

“We had 131 mile an hour winds,” Pierce said during an interview with Radio Iowa. “We probably lost 12-15 of our bigger grain bins. We’ve got probably 2,500 acres of corn flat.”

Pierce said enhanced crop insurance benefits for farmers would be helpful, along with expanded trade and ethanol production.

“We need a price in the future here, too, not just this year,” Pierce said.

Pence is speaking at a rally in Urbandale in support of police and he’ll be the keynote speaker at a private fundraiser for the Republican Party of Iowa this evening.