You are here: Home / Recreation / Entertainment / Some state parks back open after derecho clean up 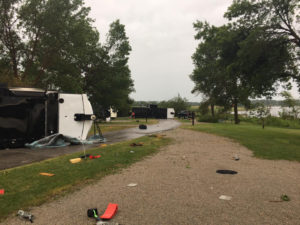 Campers overturned by the wind at Pleasant Creek.

Four of Iowa’s state parks remain closed to all visitors due to extensive damage from Monday’s strong wind storm, while several other state parks are only partly open as cleanup operations continue.

Alex Murphy, the spokesman for the Iowa Department of Natural Resources, says the majority of the trouble is with downed trees, as there was little structural damage in the parks.

“We have one cabin that was hit by a tree at Union Grove State Park but otherwise, our parks are open,” Murphy says. “We’re just encouraging people to avoid those areas. Staff are working very hard to clear the roadways, the trails, all of those areas, so people can still get out and enjoy that, although most people in these areas are busy cleaning up their own back yards.” 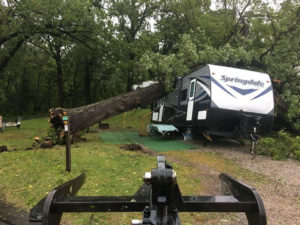 The state parks that are closed are: Palisades-Kepler, Pleasant Creek, Lake MacBride and Wapsipinicon. Parks that are partly open as cleanup is underway include: Big Creek, Ledges, Pine Lake, Walnut Woods, and Rock Creek.

Iowans are consistently generous with their time and eager volunteers want to help clear out the mess, yet Murphy says now is not the time.

“We realize people really want to help, people really want to see what’s happened to their parks that they love and that they visit all the time, but just let staff have their space and get the areas cleaned up,” Murphy says. “The quicker they can do that, the more open these parks will be and we can open up the closed ones as well.”

The winds exceeded 100 miles-an-hour in some areas during the derecho, and the destruction is extensive.

“We’re fortunate a lot of it is tree damage and we didn’t have any of our visitors that were injured or anything like that, so we’re very thankful in those areas,” Murphy says, “but I would have a hard time believing this wasn’t one of the worst straight-line wind damage storms that we’ve seen in our state parks.”

Assessment is still underway, so no dollar figures are available yet on repairs, or on the length of time it may take to reopen all facilities.