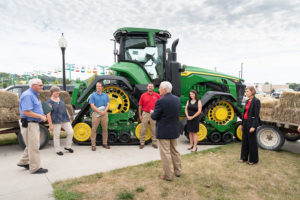 Vice President Pence with Governor Reynolds during his visit.

Pence’s 40 minute speech began with a promise to extend federal help to Iowans dealing with the aftermath of Monday’s derecho. Pence mentioned the Trump Administration’s decision to approve E15 for year-round use and he touted the new U.S.-Mexico-Canada Trade Agreement.

“The man who wrote ‘The Art of the Deal’ got a great deal for the American people,” Pence said, to applause.

Pence spent a portion of his first speech of the day contrasting the Trump-Pence ticket with Democrat Joe Biden and his newly-announced running mate Kamala Harris. Pence suggested Harris would seek to change federal dietary guidelines, in hopes of reducing red meat consumption.

“Well, I’ve got some red meat for you. We’re not going to let Joe Biden and Kamala Harris cut America’s meat,” Pene said, to cheers.

The loudest crowd response at the Farmers and Ranchers for Trump event, though, was about Trump’s promise to appoint conservative judges.

“We need more conservatives on the Supreme Court of the United States, so we need four more years of President Donald Trump in the White House,” Pence said and it was at this point the crowd on the fairgrounds started chanting: “Four more years.”

Pence also spoke tonight at a private fundraiser for the Republican Party of Iowa. The vice president’s other stop was in Urbandale, at a late afternoon event organized by Heritage Action focused on supporting law enforcement. Pence cited crime stats for major U.S. cities, suggesting Americans won’t be safe if President Trump loses in November. He also denounced the “defund the police” movement.

“President Trump and I know what the people of Iowa know: men and women who serve in law enforcement are the best people in this country,” he said, “and we will always back the blue.”

Iowa Democrats like former Iowa Governor Tom Vilsack criticized Pence for spending his time campaigning rather than touring areas damaged by Monday’s “phenomenal storm” that damaged 10 million acres of cropland and has left hundreds of thousands of Iowans still without power.