You are here: Home / News / Alliant promising to have power restored in Iowa by Tuesday 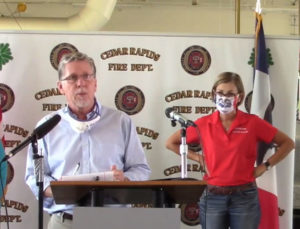 Governor Kim Reynolds says she met last night with executives from Alliant, MidAmerican and ITC Midwest,  the company that owns hundreds of miles of high-voltage transmission lines that went down during Monday’s storm.

“You’ve got people that are working around the clock. Alliant’s doing a great job. They gave us an update this morning. They’ve moved their timeline up,” Reynolds said during a news conference in Cedar Rapids early this afternoon. “What we need to do is we need to get power to Iowans and to those that are affected.”

Reynolds has asked governors in surrounding states for generators that are powerful enough to run utility substations that receive the power from the high-voltage transmission lines. Oklahoma’s governor is sending two, but Reynolds cautions these are temporary fixes and permanent repairs to the power grid will take some time.

Iowa Utilities Board chairwoman Geri Huser said the board just ordered all of the state’s utilities to provide “granular data” to customers about when power will be restored.

“In addition, Governor Reynolds asked and MidAmerican Energy and other state utilities responded by offering their resources as they become available to Alliant and ITC Midwest with their repowering efforts to further accelerate the restoration timeline,” Huser said.

As of 1:30 this afternoon, online data indicates nearly 170,000 homes and businesses in the state are enduring a fifth day without electricity.

Governor Reynolds held a news conference early this afternoon in the Cedar Rapids Fire Department. Brad Hart, the city’s mayor, said the “large majority” of Cedar Rapids residents are struggling during this fifth of day without power, hot meals and other critical resources.

“We will recover from this. It seems hard to believe right now,” Hart said. “…When the power comes back on, it will make life a lot easier for all of us, but we do have a long road to recovery.”