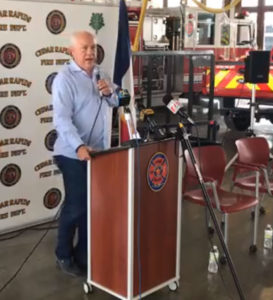 City Manager Jeff Pomeranz says he’s already been asked how this disaster compares to the major floods they’ve battled in recent years. “I’m here as city manager to tell you that in my experience — and I was involved in the flood of ’08 as well as ’16 — this is a greater impact than we’ve ever seen in this community,” Pomeranz says.

He says he is not minimizing at all the impact the floods had on the city.
“In this particular occurrence, this storm, this derecho, every area of our city has seen destruction,” Pomeranz says. “And the impact goes well beyond Cedar Rapids.”

He says the amount of damage is hard to imagine. “Someone said not long ago to me on Tuesday ‘are we still a tree city?’ We are very proud of being a tree city in Cedar Rapids. And now we have lost thousands of beautiful old trees, trees in our city,” Pomeranz says. “And seeing that is hard, seeing buildings knocked down, seeing roofs blown off is tough for all of us as Cedar Rapidians.”

Pomeranz says they had to wait to hold a public news conference because 98% of the electricity was off. Some 78% of the city still had the electricity out on Thursday and Alliant Energy’s Mike Wagner says it is going to take some time to get it all back on.

“We believe that we could substantially restore electricity to most of Cedar Rapids in the next five to seven days,” Wagner says. He says they have gotten electricity to the hospitals to allow them to go off generators.

There’s been many questions about whether the Iowa National Guard will be mobilized to help Cedar Rapids. Mayor Brad Hart says he got a lot of negative feedback from comments he made about the National Guard — and says he was not speaking about the overall need for the guard help.

“I said I think we are ready to handle our tree removal. That was all I said. I don’t think we need the National Guard to handle tree removal, there is nothing more to it,” Hart explained.

Governor Kim Reynolds is visiting Cedar Rapids today (Friday) and late Thursday said the National Guard is being sent there to help.