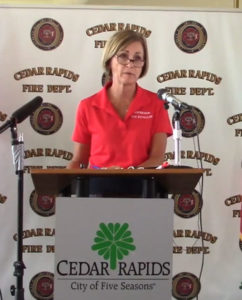 Governor Kim Reynolds says she’ll be submitting the paperwork Monday for a federal disaster declaration for areas of the state that have been devastated by last Monday’s derecho.

“There’s criteria that you have to make, so we’ve got people doing surveillance,” Reynolds said today. “…Realistically, by the time we collect the information, that’s just how long it’s going to take.”

“They’re flying several of the county areas to do GIS mapping of debris piles because one of the things we have to do is give the federal government an idea of the magnitude of the disaster,” Flinn said. “We have estimates from utility companies. We’re verifying those and there is detailed information that has to go into that process.”

Governor Reynolds has declared 25 of Iowa’s 99 counties disaster areas, but neither Reynolds nor Flinn indicated how many of those counties might be included in Monday’s application.

“The governor did ask if I could get this done today. It’s the only time I’ve told her: ‘No.’ We could not get it done this quickly,” Flinn said, “but we’re working on it and we will have a letter prepared for her signature so she can submit that declaration on Monday.”

Flinn and Reynolds spoke early this afternoon at a news conference at the Cedar Rapids Fire Department. Reynolds told reporters she has talked with President Trump earlier this week and with Vice President Pence yesterday to lay the groundwork for a quick response, once the request is formally presented.