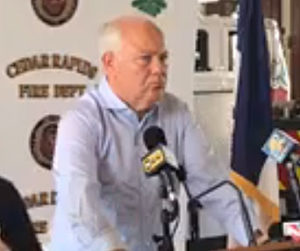 Leaders in Cedar Rapids held a news conference to update the recovery efforts there shortly after learning President Donald Trump said he has approved a major federal disaster declaration for the state.

City Manager Jeff Pomeranz was asked about how the money and how he expects it to be used. “It is our hope that the dollars will be there to help residents — particularly for uninsured losses. Help businesses get back on the ground and going again, and as well as assist the city and local government with facilities,” Pomeranz says.

Pomeranz says they know from past declarations for flood damage how important this is. “It will be a long effort — but I think that with the major declaration passed — it will assist homeowners, business owners, hopefully, the city and other layers of government, and it will help us get back on track, which is far better than just a declaration of disaster,” according to Pomeranz.

The federal disaster declaration is not the only help coming to the city. the United Way of East Central Iowa’s Kristin Roberts says the word had gotten out about the city’s plight. “We have 14 national disaster relief organizations that have boots on the ground today. And we know of at least two more that are coming in this week, if not more than two,” Roberts says. ” So we have an amazing amount of support. As someone else noted, our word is getting out and the help is pouring in.”

The Benton County town of Belle Plaine is west of Cedar Rapids and was also hit hard by last week’s derecho. Belle Plaine city council member Mark Tegelar) says a previous water problem and power outages have led them to ask residents to conserve water. Tegelar is also the athletic director of the school district, and says it was hit hard.
“We still do not have any power out at the school, the high school or the elementary school. I was able to just start checking some emails and doing some things at home Saturday,” Tegelar says. He says everyone in the city had some sort of damage with trees down all over.
“It’s just amazing….the trees that we’ve lost in town. The Iowa D-O-T has been in here since Wednesday and I did see them in here again today. They got some really big machinery that can clean up a lot of stuff in just a small amount of time,” Tegelar says. “Right now it’s just let the line guys do their thing and we are just trying to get the debris out of the way.”

Tegelar says it has not been easy to keep track of the athletic program. “It’s been a challenge not being able to get ahold of people. The football field, the scoreboard looks pretty rough, but we don’t have any juice right now to find out just how bad it is — so we are kind of in a waiting there,” Tegelar says. “We’ve got a lot of water in our gym. The floor looks okay right now — we’ve got to get that thing covered. So we’ll get the supplies in get that thing taken care of.”

Belle Plaine has around 2,500 residents.

(Chris Varney of KGRN in Grinnell contributed to this story.)