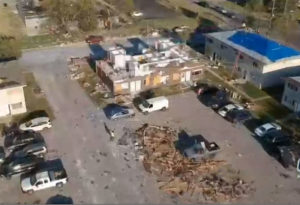 Tens of thousands of Iowans are still living without power and many without an actual roof over their heads a week after hurricane-force winds swept through a third of the state.

This weekend, Kelly McMahon, a kindergarten teacher in Cedar Rapids, spoke with KCRG TV amid the rubble of an apartment complex where some of her students are living in texts or sleeping in cars with their families.

“It feels like I’m in a third world nation,” she said. “This to me seems as if it’s our version of a Katrina, minus the deaths.”

Early Sunday evening Governor Reynolds announced she filed an expedited request for a presidential major disaster declaration. A news release indicated nearly 8300 homes in the state were damaged or destroyed by the derecho and the governor said it will require nearly $4 billion in federal aid to fully recover from the disaster.

Residents in the city of Grinnell have been told it may be Thursday before electric service is fully restored to all home and businesses. Steve Langrud is the manager of the Mayflower Retirement Community, a 38-acre campus in downtown Grinnell, where the health center and assisted living wing have been running on generator power, but those living independently had no electricity.

“When you layer in issues like mobility and health issues and the number of people who use electricity for some kind of a nighttime breathing device…it really becomes quite a challenge to make sure that people actually live,” he told Radio Iowa.

There are 240 residents on the Mayflower campus in Grinnell and 140 people work there. Langrud is worried about the stress his employees are under.

“They work hard and then they go home. They have no power. They have trees on their houses. They have devastation in their yards,” he said. “They have children who they’re worried about what’s going to happen with school. All of our schools were damaged — and you layer Covid in — it gets hard when they leave.”

No part of Grinnell was left untouched by the derecho, according to Langrud

School officials in areas hit by last Monday’s storm are sorting through damage to buildings and deciding when the school year may start. On Friday, Newton’s School Board unanimously voted for a two-week delay. School Board member Travis Padget said the community is facing dire circumstances.

“We have so much clean up and so much going on, it’s a lot of stress,” Padget said, “…and I think buying two weeks for families will really help families right now.”

“In the chaos that we have now with the destruction in the city and around the area, we are trying to give people the peace of mind of knowing exactly what the calendar and the timeline is,” he said.

Several buildings in the Newton District sustained damage. The partial roof repair project that was underway at Newton’s High School has to basically start over. A gas line at the high school ruptured. The roof of a Newton elementary school was punctured by trees and there was no electricity to deal with some of the water and drainage issues.