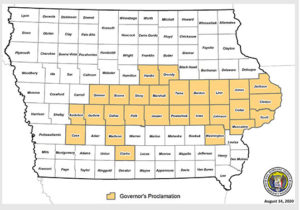 President Donald Trump announced outside the White House this morning he has OK’d federal assistance to help Iowa recover from last week’s derecho.

“I just approved an emergency declaration for Iowa who had an incredible wind storm like probably they’ve never seen before,” Trump said. “It really did a lot of damage.”

Trump spoke with reporters before heading to campaign events scheduled in Minnesota and Wisconsin today and hinted he may make a surprise visit to Iowa.

“If we can get it in, we’re going to do that, but the very important thing is that we approved the emergency declaration for Iowa, so they’re in good shape,” Trump said. “They’re working as we speak. Also, FEMA is in Iowa now, full force, and helping them greatly.”

The Trump Administration announced Monday afternoon that the president would be visiting Cedar Rapids tomorrow.

The administrator of the Federal Emergency Management Agency tweeted early this morning that he was headed to Iowa to meet with Governor Reynolds, but he did not say where the meeting will take place. Reynolds has tweeted she was visiting Marshalltown and Tama early this morning, but has not released a public schedule for the day.

The governor’s disaster aid request indicated storm-related losses are estimated at this point to be nearly $4 billion.

(This posted was updated)