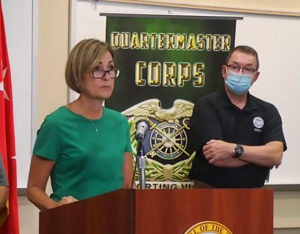 President Donald Trump is due to visit Cedar Rapids tomorrow and Governor Reynolds said it will give the president a better idea of the impact last week’s derecho has had on the state.

“Just the extensiveness of the disaster and how wide-ranging it is,” Reynolds said this afternoon.

This morning, Trump signed off on federal help to cover storm-related expenses for the state and for local governments in 16 counties. Trump tweeted that he had approved the “FULL emergency declaration for the Great State of Iowa,” but the president has not yet approved federal disaster assistance to individuals.

A spokesman for Governor Reynolds said that will happen “soon” after more data is gathered about damage to homes and businesses. Late this afternoon, Reynolds thanked federal officials for the “expedited approval” of the paperwork she submitted Sunday asking that Iowa be declared a major disaster area.

“Having a thorough request really does allow for quicker action as we’ve seen today,” Reynolds said. “…It’s more substantive and really it provides more programming and we set a record in getting it done.”

The governor did not mention during the news conference that part of her disaster aid request was still pending. Her staff confirmed it later. Iowa Congresswoman Abby Finkenauer, a Democrat who represents Cedar Rapids, said she appreciates the president’s quick action in approving public assistance for Iowa communities “to clean up and rebuild,” but she’s disappointed he did not grant Iowa’s “full request” which also seeks assistance for individuals.

“We must ensure that no Iowan is left behind by this tragedy and I ask the president to rectify his omission immediately,” Finkenauer said.

Republican Senator Joni Ernst said she expects “full approval” of individual assistance soon and she’ll work with Iowa’s congressional delegation “to ensure folks across the state have the federal help they need as communities continue to rebuild.” Republican Senator Chuck Grassley said the delay is a “normal” and “expected” part of qualifying for federal disaster aid and he accused Finkenauer of politicizing the process.

The Iowa National Guard soldiers dispatched to Cedar Rapids Friday removed more than two million pounds of debris from 68 city blocks by early this afternoon. Governor Reynolds said about 4900 utility employees, DOT workers and soldiers have been working on restoring power — and most of them have been working in the Linn County area.

“Although restoring power to homes and businesses has been our priority, the recovery from this storm will take longer and it’s going to be much more than just flipping a switch,” Reynolds said. “It’s going to be a long road of recovery for tens of thousands of neighbors and friends.”

Reynolds and Pete Gaynor, the administrator of the Federal Emergency Management Agency, toured Cedar Rapids damage, then spoke with reporters.

“There really are just not words to describe the devastation that we’ve witnessed,” Reynolds said.

The FEMA administrator said seeing the damage in Cedar Rapids was “eye-opening,” but he stressed that every disaster is unique.

“Like all disasters, a response is most successful when it’s locally executed, state managed and federally supported,” Gaynor said.

An Alliant Energy executive said by midnight Tuesday power should be restored to 90 percent of its Iowa customers. Utility crews from as far away as Nova Scotia are in Iowa helping to resurrect the damaged power grid.