You are here: Home / Fires/Accidents/Disasters / Fire Service Training Bureau has a new home at Camp Dodge 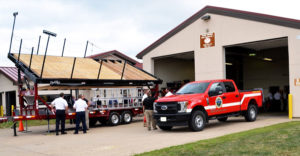 The organization which trains Iowa firefighters has moved from Ames to new facilities at Camp Dodge in Johnston.

Fire Service Training Bureau Chief John Kraemer, says the new facility is 9,500 square feet and houses their offices, equipment and has classrooms. “In addition, the Iowa National Guard has allowed us to utilize some acreage west of our facility in which we can conduct live-fire training,” Kraemer says. The National Guard has an area known as “container city” where they can train.

“There are multiple storage containers that are set up to simulate buildings. And within each of those containers are doors and rooms that have been constructed for us to practice dry or wet evolutions,” Kraemer says. “In those containers we are not permitted to burn — be we can conduct live-fire training outside in our burn cells.” He says the Fire Service Institute outgrew its facility in Ames as the types of training required expanded from basic firefighting techniques. 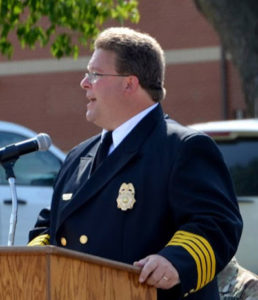 “The types and numbers of calls placed to fire departments has also increased. And so, a lot of communities now rely on fire departments to not only provide fire protection, but to also provide emergency medical services, to respond to motor vehicle accidents and perform extrication of patients from the vehicles. Fire departments are now trained in hazardous materials release response,” according to Kraemer.

He says they hold an annual fire school that got started through a need for more training. “In 1923 there was a small group of firefighters who approached Iowa State College at the time and said ‘hey we need more training in fire prevention and extinguishing fires.’ So, that became the impetus — especially nationally — to provide state-based training and education for firefighting and emergency services,” Kraemer says.

Kraemer says it’s particularly important for a state where the majority of firefighters are volunteers. “We have approximately 15 to 16-thousand firefighters total in Iowa. And about 15 to 16-hundred are career or professional firefighters,” Kraemer says. Kraemer says the new site also allows them space to store the various trailers and displays that are used for firefighter education. The new facility was celebrated with a ribbon cutting last week.