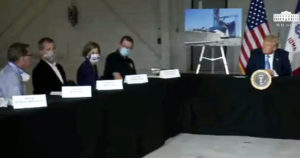 President Trump with FEMA administrator and Governor to his right in Cedar Rapids.

Trump made a stop at the Cedar Rapids airport today to speak with a panel of state and local officials as well as some invited residents from the area — including one woman who still doesn’t have power at her home eight days after the storm hit.

Cedar Rapids Mayor Brad Hart told Trump private insurance will not pay for removing trees unless the tree hits a house and it will cost many thousands of dollars to get the storm debris off their property.

“Every one of our almost 60,000 homes and businesses had some kind of damage. That’s how widespread it was. Most of the city didn’t have power for a week,” Hart said. “I still don’t have power at my home.”

Power is still out at an estimated 30,000 homes and businesses in Linn County. Hart told the president the cost of replacing spoiled food is more than some Iowa storm victims can afford.

“Adding the individual assistance component to the disaster declaration would really help so many people,” Hart said and Trump told the mayor he would “take care of it.”

On Monday, Trump approved sending $45 million in federal money to state and local governments in 16 counties, to cover the costs of debris removal and repairs to government-owned facilities. Governor Kim Reynolds told Trump she’ll likely add more counties to her request for individual assistance to residents in 27 counties.

“This is just so much widespread when you think about entire counties that have been taken out,” Reynolds said. “…These are early estimates: about $4 billion worth of damage (and) $3.7 (billion) of that is through agriculutre between the loss of crops and structures.”

Trump interjected: “So this is even more than the floods.”

The paperwork Reynolds submitted to the Federal Emergency Management Agency on Sunday estimated nearly $83 million would be needed to repair or replaced damaged homes, with another $100 million worth of damage to private utilities.

The administrator of FEMA, the U.S. Homeland Security Secretary and Iowa Republican office-holders like Senator Chuck Grassley were part of today’s panel discussion, too.

“I’ve seen corn flat on the ground in 50 years of farming,” Grassley told Trump, “but I have never seen it mile after mile and very little of it recoverable, I think.”

Senator Joni Ernst made an appeal on behalf of the ethanol industry, asking that the EPA dismiss oil refinery requests to be exempted from the requirement to blend ethanol into gasoline.

“What we need is help from the EPA to follow the intent of the law, with the Renewable Fuels Standard,” Ernst said.

Trump replied: “I’ll speak to them. I’ll do it myself.”

Air Force One landed at the Eastern Iowa Airport shortly before 11:30 and departed about an hour later. The plane’s flight path in and out of Cedar Rapids gave the president an aerial view of the storm’s destruction.

“We’re going to help you recover from the storm and we’ll get it done and we’ll all get it done together,” Trump said. “Iowans have always been resilient and strong and tough and great people. From the depths of this grave hardship, we will rebuild even stronger than before. We’re going to be in fantastic shape in a very short period of time.”

Only a few dozen people — supporters and protesters — gathered outside the airport for the president’s visit. Joe Biden’s Iowa state director called the event a “photo op.” Elected officials from the Cedar Rapids area who are Democrats were not invited to the discussion. Democratic Congressman Abby Finkenauer, who represents Cedar Rapids, said in a written statement that she appreciates the president’s visit to Cedar Rapids and hopes his experience reinforces the need for direct federal assistance to affected individuals and households.

(This post was updated at 2 p.m. with additional information.)