You are here: Home / News / Vilsacks use convention video to call attention to derecho’s ‘terrible toll’

“We were going to talk to you tonight about biofuels, but the powerful storm that swept through Iowa last week has taken a terrible toll on our farmers, our small businesses and our families who are still without power,” Tom Vilsack said.

Christie Vilsack added: “So while we have the honor of casting Iowa’s votes — 11 for Bernie Sanders and 38 for Joe Biden — we also want to ask you to keep Iowans in your thoughts at this difficult time.”

As the Vilsacks’ video was played, 35,000 Iowa homes, schools and businesses were still without electricity. 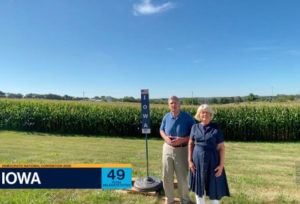 Iowans who endorsed Kamala Harris for president a year ago will be watching the convention tomorrow night as Harris formally accepts their party’s vice presidential nomination. According to former Iowa Democratic Party chair Sue Dvorsky of Coralville,  Democrats are ready for the long-haul.

“I truly believe that the Democratic Party is not going to allow to happen what happened to Hillary Clinton. We will rally around,” said Dvorsky, who endorsed Harris for president last August. “…We will defend her and defend him with everything we’ve got in us.”

Penny Rosfjord of Sioux City endorsed Harris for president last September and she said it was tough to hear all the speculation about who Joe Biden might pick as a running-mate.

“In my heart that’s who I wanted, but I kept telling myself it wasn’t going to happen. I can’t determine who is going to be the vice presidential candidate for Joe Biden and when they announced I was thrilled,” Rosfjord said. “Thrilled to death.”

“It’s going to be a partnership and they may not always agree, but they will work it out,” Rosfjord said. “They’ll hammer it out. They may scream it out. Who knows? But I think that is a good thing.”

Rosfjord, the former chair of Woodbury County Democrats, has never been a delegate to a Democratic National Convention, but she’s been a convention junkie since she was a kid.

“It goes way back to my parents. We watched both the Democratic and the Republican National Conventions as if it was the Super Bowl. I mean, it was a big deal,” she says. “Every night we watched. We watched all the speeches.”

As Rosjford watched the convention tonight, she tweeted a quote from the keynote speech she had watched Ann Richards deliver at the 1988 Democratic National Convention.