Efforts to repair the derecho damaged city of Cedar Rapids continue to move forward as more power has come back on and city leaders reported Tuesday that most traffic signals are working again.

The city also shortened its curfew — starting it at midnight instead of 10 p.m. One thing that is still up in the air is the start of the school year. 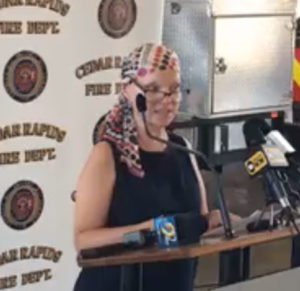 District superintendent Noreen Bush gave an update Tuesday and said they are still trying to get a handle on the damage to the district’s 34 buildings  “All of our buildings had damage. Some not so good — and some it’s horrific,” Bush said.

The Cedar Rapids district is the second largest in the state. Bush says insurance adjusters have been out surveying the damage.
She says they should have a better idea of the damage by the end of this week. “Absolutely, our number one goal is to get children back into school.”

Bush says the district is ready with computers and i-pads for every student, and hot spots for those who need internet access — but they can’t put that into action until the electricity and internet are repaired. The district had planned to bring students back for in-person learning or online instruction on August 24th.