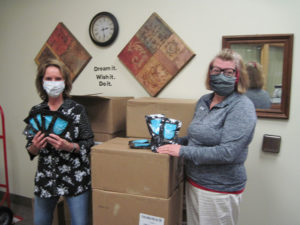 Thousands of senior citizens in Iowa are being given kits that can render their unused medications worthless and harmless as part of an effort to reduce the misuse of prescription drugs.

Trina Radske-Suchan, president of CHPcommunity in Clive, says the disposable drug deactivation kits are about the size of a zip-lock sandwich bag and they’re simple to use.  “So, it could be a pill, it could be a liquid, it could be a film, you put them into the bag and add water to it and then you seal it, you shake it up, and then you dispose of it,” Radske-Suchan says. “It’s environmentally safe and everything degrades.”

CHP Community and the Rx Abuse Leadership Initiative or RALI of Iowa are partnering with a state agency on the effort.  She says, “We worked with the Iowa Department on Aging and we were able to get 5,800 of these kits out to seniors through the home meals delivered program.”

The kits are being delivered — along with meals — at four Area Agencies on Aging across the state. A state report says the number of opioid-related overdose deaths in Iowa is falling gradually, from a peak of 206 deaths in 2017 down to 136 deaths last year. It’s hoped the drug deactivation kits can help keep more prescription drugs from falling into the wrong hands.

Radske-Suchan says, “With our opioid epidemic nationwide but also in Iowa, it’s a really great prevention activity that we can do by providing all the means and information to families on how to discard their unused medications.” The partner agencies include Milestones Area Agency on Aging in Muscatine, Heritage Area Agency on Aging — headquartered in Cedar Rapids, Northeast Iowa Area Agency on Aging in Waterloo, and Aging Resources of Central Iowa, based in Des Moines.