You are here: Home / Human Interest / Sailors from new USS Iowa take time out for derecho clean up duty

Four sailors who are preparing the U.S.S. Iowa submarine for duty in Connecticut are in Iowa the next couple of days helping with the derecho recovery.

Bradford Vanorden is from New Jersey says the decided to help out after hearing about all the damage here. “We wanted to be able to give back to our sponsor state, so what we did is we did a collection drive and we got a bunch of supplies and tools and we drove them out here on Monday,” Vanorden says.

He has never been to Iowa before. “It was really actually quite amazing yesterday driving through Cedar Rapids and seeing just how much damage there was in that area. It reminded me a lot of — being from New Jersey — I lived through Hurricane Sandy and Irene and it reminded me a lot of what happened there,” according to Vanorden.

Crewmember Keith Miller is a Des Moines native. “The damage is really, it’s just insane, not something I thought I’d be coming back into,” Miller says, “I heard the stories — but seeing it first-hand is completely different.” 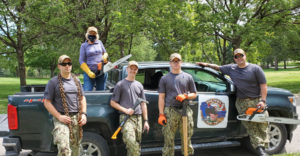 Vanorden says they would normally be preparing for the submarine’s completion in September of 2022. “Our day-to-day operations are mostly training and working on qualifications to get ready for when we will actually be standing watch on the boat and then preparing for taking operational control of the various systems that will be turned over to us by the shipyard,” according to Vanorden. “And then throughout the construction process where we eventually will have full control of the boat, getting ready to test it and get it underway.”

Miller is looking forward to serving on the ship named for his home state. “I am pretty excited to get the opportunity. It’s one of the military’s most advanced pieces of equipment and you have the honor of building that and shaping that and getting it ready for the future,” Miller says. “And if you think about the average life span of the submarine — somewhere in the next 30 years — we are bound to experience some sort of action, some sort of conflict. So, it’s good to be shaping it up and being sure everything is good to go to protect America.”

The sailors worked at Union Park in Des Moines Tuesday and today  will assist with clean-up at the Iowa Veterans Home in Marshalltown. They will finish with clean-up in eastern Iowa on Thursday and Friday. The submarine is the fourth naval vessel to be named after the state of Iowa.