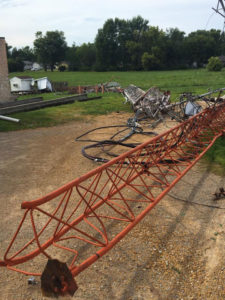 KROS radio tower blown down by the derecho.

Rich Kinney is the warning coordination meteorologist at the National Weather Service in the Quad Cities and he’s inspected the devastation himself in communities across eastern Iowa. “The maximum estimated winds at this point are around 140 miles-an-hour,” Kinney says, “and that’s associated with structural damage in the Cedar Rapids area.” Wind speeds for a major, Category Four hurricane range from 130 to 156 miles-an-hour — lending credence to those who’ve called this powerful storm a “prairie hurricane.”

Kinney, who’s been with the weather service 23 years, says he’s never seen this type of destruction before, especially in Iowa. Cedar Rapids got the worst of it, he says.  “Some apartment complexes where the entire roof was lifted off,” Kinney says. “Most of the exterior walls on the top floor were gone and a few of the interior walls as well.”

The highest estimated winds in this storm were gusts of 126 miles-an-hour, recorded at a home weather station of an emergency manager in the Benton County town of Atkins. The estimated winds of 140 miles-an-hour that were based on the structural damage could be an all-time Iowa record for straight-line winds. Might they go even higher? 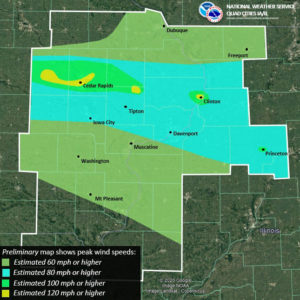 “That is hard to say,” Kinney says, “because we’re still getting additional reports coming in daily, even ten days after the incident.” Gusts between 120 and 140 miles-an-hour are now estimated in three main areas of eastern Iowa: a long stretch across Linn County which includes Cedar Rapids, and smaller patches in and around the city of Clinton and straddling both Jones and Cedar counties.

With state damage estimates approaching four-billion dollars, Kinney says this will likely go down as the most powerful derecho Iowa’s ever seen, especially given the long-duration winds. “For a lot of folks, that’s what really made it seem like you were experiencing a hurricane,” Kinney says. “We had many locations with sustained, strong winds and extreme gusts for 30 to 45 minutes or so.”

A radio antenna near Van Horne that was rated to be able to withstand 125 miles-an-hour winds was snapped off in the storm. Another radio tower in Clinton, carrying the signal of Radio Iowa affiliate KROS, was flattened in winds Kinney estimates at 130 miles-an-hour.