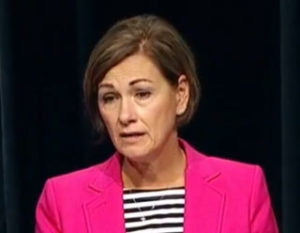 Governor Kim Reynolds today said the state website that lists Covid-19 data is “a work in progress” and a “glitch” that reported recent positive test results as having been confirmed weeks and sometimes months ago has been addressed.

“The reporting issue occurred due to an effort to avoid duplicating test results for individuals who tested multiple times,” Reynolds said.

For example, nurses are frequently tested and the governor revealed she has been tested 10 times. The state’s medical director became aware of the discrepancy in reporting some positive results at the end of July, shortly after the governor announced the website’s data would determine if a district would be allowed to switch students to online instruction. Dr. Caitlin Pedati, the state medical director, acknowledged today during the governor’s news conference that the backdating “wasn’t ideal,” but had been addressed.

The governor told reporters she was not made aware of the inaccurate data until last week. Early this week, a nurse practitioner in Iowa City alerted various media outlets she’d received an email from the Department of Public Health to confirm discrepancies on the website.

“I do want to thank Iowans who use the data that we provide, who dig into it and raise questions when they have ’em,” Reynolds said during the news conference at Iowa PBS. “We continue to encourage that. It helps us constantly improve the data.”