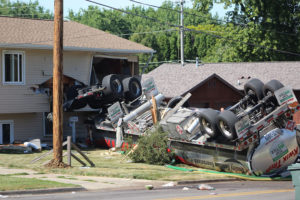 The tanker after crashing into a Waterloo home.

Waterloo police say a man crashed his car this morning and then got into a fuel tanker and crashed it into a house as he tried to get away.

Major Joe Leibold says officers responded after reports of the car wreck. He says officers found the man driving the truck at a high rate of speed through traffic lights, and by the time they got behind him he had crashed the tanker truck.

A man was sleeping in the home and escaped without injury.

Firefighters evacuated part of the neighborhood and a hazmat team was called to help with the fuel spill. Leibold says the fuel was everywhere.

Diesel fuel spilled when the tanker hit a Waterloo house.

The truck driver was taken to a hospital after being pulled from the truck that had flipped over.  Liebold says they will release the man’s name and decide on charges after he has been treated at the hospital.