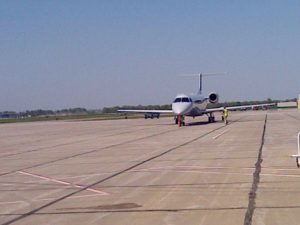 American Airlines has announced they plan to temporarily drop flights at Sioux Gateway Airport, along with 14 other cities starting October 7th when a federal requirement to serve the community ends.

Airport Director Mike Collett says it is expected with the drop off in travel caused by the pandemic. “They’re reacting to their demand and trying to plan the best they can. We definitely are going to continue to have those discussions with them, and hopefully, it is not a final decision,” Collet says. He remains optimistic that service with American Airlines will eventually resume.

“That’s our hope, we have a very good relationship with American. I think they’re faced with some very difficult decisions right now. And hopefully, we can just keep the discussion moving to keep the service that we have with them,” he says.

Collett says they are looking forward to open discussions with airline officials. He says they will push the fact that Sioux City is an essential air service market as they try to keep the service. If you already have tickets purchased to travel out of Sioux Gateway Airport, Collett says you can likely rebook.