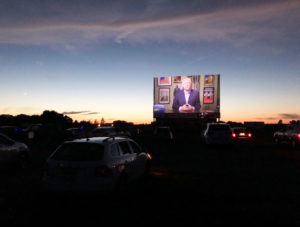 Democrats watch Joe Biden’s speech at the drive in.

About 50 vehicles with more than 120 invited Democrats inside gathered in eastern Iowa last night to watch Joe Biden’s speech on the final night of the Democratic National Convention.

“It is perfect night to be at a drive-in movie theater,” said Elesha Gayman of Davenport, one of the Iowa Democratic Party’s 2020 national convention delegates who gathered at the Blue Grass Drive-In in the Quad Cities.

Fashion on the convention floor is often garish, with towering hats, donkey-themed accessories and a whole lot of red, white and blue, so for the final night of the virtual convention, Gayman wore several campaign buttons and she decorated her car for the occasion with Biden posters, balloons, and even crepe paper streamers.

“Because we can’t do our convention hat,” Gayman said, laughing, “so we wanted to make sure that we still had fun with it and kind of went all out with decorating the car.”

Parking protocols ensured the vehicles were positioned more than six feet apart and everyone was told to wear face masks outside their vehicle. Gayman said she had “no words” to adequately describe being near other Democrats on the final night of the convention.

“The silver lining from this pandemic is we’ve really appreciated that togetherness and I think especially since it’s been so long that folks have been able to gather, you know people are just really anxious and happy to enjoy one another’s company,” she said,” even if it from a couple of cars away.”

Gayman and other Iowa Democratic Party delegates met online via Zoom each night at 6 p.m. this past week, before the virtual convention began. Party chairman Mark Smith gave the group this post-convention charge.

“We all need to take time every day to think of that friend who may not be registered to vote,” Smith said. “…We have to think of all of those people and we have to help them make their plans to vote.”

The Republican National Convention is scheduled to start Monday.