You are here: Home / News / Drought conditions now reported in majority of Iowa 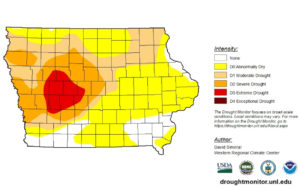 Drought conditions continue to expand in Iowa, covering nearly 88 percent of the state.

State Climatologist Justin Glisan says rainfall in western Iowa over the last six months is as much as a foot below normal — and in Iowa’s extreme drought region last week’s derecho dropped between a half inch to an inch of rain.

“For a drought buster to take really hold you would need measurable rainfall every five-to-seven days for a few months to really start eating into those precipitation deficits,” Glisan says.

The latest drought report was issued yesterday. It classifies new areas of southern Iowa as abnormally dry and parts of northeast Iowa as moderately dry. Extreme drought conditions are reported in all or part of a dozen west central counties, including the cities of Carroll, Jefferson and Audubon.

“It’s not looking like we’re going to get measurable rainfall that we need over the next seven days,” Glisan says.

Glisan says there may be more chances for rain as summer ends and storms tend to produce up to an inch of gentle rainfall over several hours. Until then, Glisan says weather systems over Minnesota and Missouri could shift and produce rain over Iowa and hurricane season could have an impact.

“The tropics are starting to heat up again. There’s a possibility of two landfalls in the Gulf of Mexico,” he says. “If those tropical systems do make inroads into the United States, we might be able to seed some moisture into the Midwest, making conditions more favorable for rainfall.”

The U.S. Drought Monitor indicates areas of southwest and southeast Iowa are not in the drought zone.