You are here: Home / Education / Students return to Dyersville Beckman after five months off 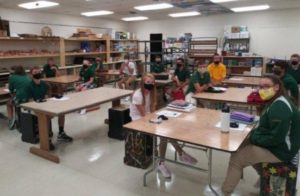 Dyersville Beckman Catholic is one of the first high schools to return to classes for the new school year.

Beckman students haven’t walked the hallways for five months – and Principal Marcel Kielkucki says it is good to have them back Thursday. “We’ve been working through the past several months on plans to make sure that we take precautions as best we can to make sure that school is a safe environment for our kids. We also know that it is important for them to be back here learning with their friends, classmates, and with their teachers,” Kielkucki says.

Kielkucki says the new precautions include staggering passing times between classes and keeping the same group of students together as much as possible. He says they have also changed the lunchroom routines to keep students spread out and making sure they have time to eat.

Kielkucki says they will be flexible as they see how things work. “You know we’ve got plans in place. Once you are actually able to implement a plan you can see what’s effective with it,” he says. “We talked about staff reviewing those items — knowing that we will make modifications as we go.” He says face coverings will be required at Beckman when they can’t socially distance.

As a Catholic school focused on celebrating their faith, he says they’ll need to get used to a new routine – which means no longer gathering as an entire school for weekly Mass. “Our current plan is that we will still have a weekly Mass on Thursdays — but we are limiting the number of students who will come to Mass each week. So, we will have two grade levels come and use our auditorium so we can space out more effectively,” Kielkucki explains.

St. Francis Xavier grade school in Dyersville has also started back to class. Most other area schools are heading back to class on Monday, including West Delaware, Ed-Co, Maquoketa Valley, and Western Dubuque.