You are here: Home / News / Iowans Reynolds and Ernst to speak at Republican National Convention

Six Republicans from Iowa are in Charlotte, North Carolina, representing the Iowa GOP at the Republican National Convention.

Jeff Kaufmann, the state party chairman and leader of the delegation, said it’s taken a bit to get used to the restrictions in place due to the pandemic.

“I’ve had two Covid tests. I have my temperature taken every single day,” Kaufmann told Iowa reporters during a late afternoon conference call. “I can’t go anywhere without my armband showing everything is healthy. Everybody’s wearing masks.”

Each state and U.S. territory sent just six representatives to the convention. Iowa Delegate David Barker of Iowa City said this weekend’s pre-convention meetings were held in cavernous rooms with only a few people inside.

“Hand sanitizer everywhere. Masks being handed out to everyone,” he said. “It’s not fun, but it’s a real commitment to safety.”

Tamara Scott, the Republican National Committeewoman from Iowa, said this convention is different from previous conventions she’s attended for another reason. She mentioned in 2012 there was still a convention tussle between supporters of Mitt Romney and Ron Paul. 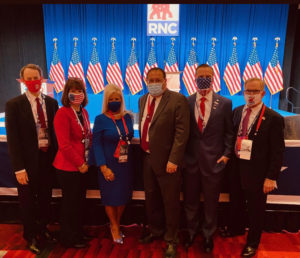 “Even in 2016, Trump was new and not everyone was on board yet,” Scott told Iowa reporters. “There is a fire on board behind this Trump train…I have not seen this type of enthusiasm in quite some time.”

The Trump campaign announced today that U.S. Senator Joni Ernst has a speaking spot the convention late Wednesday evening. Iowa Governor Kim Reynolds is scheduled to speak Tuesday night, but according to Reynolds’ campaign, she’ll deliver her remarks remotely and won’t be traveling to the convention site. Kaufmann, the Iowa GOP’s chairman, said he can’t speak for Reynolds, but she’s likely relieved by that arrangement.

“This allows Kim Reynolds to have her cake and eat it, too,” Kaufmann said. “She can stay home, keep her mind on Iowans, but take just a little bit of a break to make sure that Iowa — a little state of 3 million plus — is heard by everybody in the country and it doesn’t hurt when we’re going to be asking eveyrbody to make us First in The Nation as well.”

There is no vote at the convention on the schedule for the 2024 presidential nominating contests and Kaufmann has repeatedly said there’s no move among Republicans to dethrone the Iowa Caucuses as the lead-off event of the presidential campaign. Kaufmann has been harshly critical of the outgoing chairman of the Democratic National Committee, who said a week ago that Democrats should only have primaries during the 2024 presidential race.