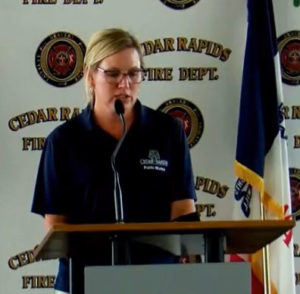 Officials have ended the overnight curfew in Cedar Rapids that went into effect after the August 10th derecho hit the city. Cedar Rapids Fire Chief Gregory Smith said with power mostly restored in the city, nighttime travel is a bit safer.

“We ask citizens to continue to be still be vigilant during the evening and overnight hours when it is difficult to see debris on sidewalks or roadways,” he said, “because there are still hazards that are out there.”

A ban on outdoor burning remains in effect indefinitely.

“Elevated temperatures and tree debris drying out quickly causes enhanced fire risk in our community,” Smith said during a news conference this afternoon. “While we still do allow outdoor cooking, we ask that everyone to be cautious if they are conducting outdoor cooking and that the cooking fire is completely extinguished immediately upon finishing that cooking your meal.”

“We have also completed our first pass on collecting curbside debris from approximately 20% of our roadways,” she said. “…As a reminder, we have a massive volume of debris within the city and we understand some streets still have large piles.”

Contractors that specialize in high-volume debris removal have been hired and will begin working in Cedar Rapids tomorrow, she said.

Power has not been restored to about 650 homes and businesses in Cedar Rapids. It’s unsafe to reconnect those structures to the electric grid in some cases, due to the severity of the damage. City officials say at least 1700 housing units in the city were destroyed or have major damage.