You are here: Home / News / Farmer’s Almanac predicts a cold winter with lots of storms 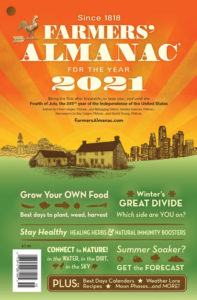 The new edition of the Farmers’ Almanac is out today, and  predicts Iowa is in for an exceptionally cold winter ahead, with above-normal snowfall.

Almanac editor Peter Geiger refers to the approaching season as “The Winter of the Great Divide.” “This country is going to have a drought in the West, it’s going to be very cold in the North, and then everything in between is going to be really wild weather,” Geiger says. “It looks like it’s going to be a pretty active winter, a lot of storms, a fair amount of snow. It’ll be a winter to remember.”

Meteorologists at the National Weather Service may say it’s impossible to accurately predict the weather more than a few weeks out, but the Farmers’ Almanac routinely works two -years- ahead. Geiger says their prognosticating formula was developed by the first editor in 1818.

“The components of it are sunspot activity, planet positions, the effect the Moon has on the Earth, and this mathematical formula,” Geiger says. “Sometimes there are things that are a monkey wrench in our predictions, but for the most part, we do a good job. We’re told that we’re somewhere between 75 and 85% accurate.”

While some Iowans may dismiss the Farmers’ Almanac as hogwash, others treat its predictions very seriously and will organize their annual calendars around it.  “They do plan their weddings, they do, because we hear from people all the time about what the weather is going to be for a wedding, for vacations, for travel,” Geiger says. “That’s what the long-term weather is for, to give people an idea of what to expect, and as it gets closer, obviously, they can check with the local person, too.”

The destructive derecho that hit Iowa two weeks ago today was not specifically predicted in the 2020 edition. Geiger says rain was forecast for our region on August 10th, but not “The Big One,” and he adds, “Wish we had.”