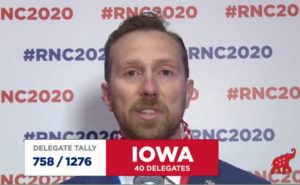 In opening day business at the Republican National Convention, the Iowa GOP’s delegation has formally cast its 40 votes for the nomination of President Trump. Anthony Marlowe of Iowa City, one of six Iowa delegates at the convention site, made the announcement.

Each state was given three minutes to make a speech on the convention floor in Charlotte. Marlowe listed all the Iowa GOP candidates for federal office who’ll be at the top of the Iowa ballot with Trump.

“Mr. President, I’m a CEO and entrepreneur. On Election Night in 2016, I had 400 employees. Today, we have almost 4000 thanks to your explosive economic policies,” Marlowe said, as the crowd interrupted his remarks with applause. “In short, sir, you’re crushing it.”

“Iowans are resilient. We thank you and our representatives for the swift, decisive and continued action,” Marlowe said.

At last week’s virtual Democratic National Convention, each state was given about half-a-minute of recorded video time to cast delegate votes. Former Iowa Governor Tom and Christie Vilsack, who announced the votes from Iowa’s delegation, focused their remarks on the derecho.

Current Iowa Governor Kim Reynolds has a speaking slot tomorrow night at the Republican convention, but her campaign has announced she’ll appear remotely, staying in Iowa rather than traveling to Charlotte, North Carolina to deliver her remarks.