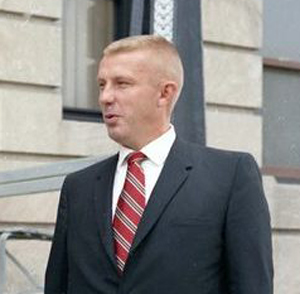 A former Sioux City man who headed the federal prison system for seventeen years has died in Arizona at the age of 87.

Norman A. Carlson was promoted by then Attorney General John Mitchell in 1970 to become the 4th Director of the Federal Bureau of Prisons, a position he held until his retirement in 1987.  Carlson was born in Sioux City, graduating from Central High School and then Gustavus Adolphus College in Saint Peter, Minnesota. One of his first jobs was working during the summer on a local ambulance crew with George Lindblade, who became a longtime friend.

Lindblade says Carlson also spent a lot of time hanging around the police station when he wasn’t working on the ambulance crew and that is probably what got him interested in the prison system. Carlson went on to the University of Iowa where he received his Master’s Degree in Criminology and began working in the State of Iowa’s corrections department.

Lindblade says Carlson got a push to join the federal prison system from an unlikely source. “He went to the Iowa system and had various administrative jobs…and one of the prisoners down there told him ‘you are too smart to work in the Iowa system, you ought to go to the federal agencies and see if you can get a job there.’ He took that as a challenge and did — and of course worked his way up to the top job,” according to Lindblade.

Carlson and his wife Pat moved to Leavenworth, Kansas, and then Kentucky before being transferred to Washington, D.C. to work on then Attorney General Robert Kennedy’s new halfway house program. He served throughout the Watergate era and ultimately had custody of those convicted, including Attorney General Mitchell, who appointed him. Carlson was credited with improving the Bureau of Prisons through many innovative changes with a focus on protecting inmates, prison staff, and the public.

Lindblade says Carlson worked to reduce overcrowding in facilities and also spearheaded the development of the supermax prison. “One thing about it — Washington didn’t change him,” Lindblade says, “he kept the same personality he had as a kid here. I compliment him for that. He was the right guy for the right job, and we need more like him.”

Carlson also championed increased diversity in the workforce and developed an independent research branch to monitor and track the results of programs. During his 17-year tenure as Director, he served under eleven different Attorneys General, and four Presidents, representing both political parties.