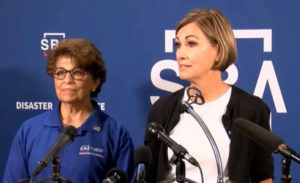 Governor Kim Reynolds says she’ll talk about the destruction and recovery from the August 10 derecho in her speech this evening at the Republican National Convention.

“It’s a shout out to Iowans and their tenacity and their resiliency in the face of adversity,” she said during a Cedar Rapids news conference, “but also the tremendous partnership that we’ve seen from the president and this entire administration.”

Reynolds toured Cedar Rapids this morning with the head of the Small Business Administration. She told reporters U.S. Ag Secretary Sonny Perdue will visit Iowa next week to see the crop damage from the derecho.

“I often say, and I’ll say that tonight, I often refer to Iowa is one big small town and it’s neighbor helping neighbor in the face of disaster and adversity,” Reynolds said. “We show up. We help each other, but we also have another individual that has helped out in all of that and that’s been our president.”

Reynolds said in the midst of the current disaster, it seems long ago, but she also credited theTrump Administration for providing assistance to rebuild levees along the Missouri River that were breached by significant flooding in 2019.

The governor announced in Cedar Rapids today that the state has launched a new website with information about assistance that may be available to Iowa derecho victims. The website has a portal to FEMA disaster assistance applications as well as links to things like volunteer opportunities and community resources.