You are here: Home / News / Reynolds says Trump ‘had our backs’ after derecho 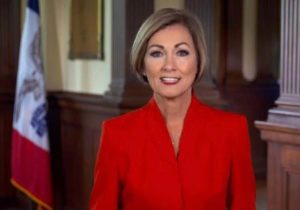 Governor Kim Reynolds used her speech at the Republican National Convention to praise President Trump for approving federal aid to Iowans reeling from a natural disaster.

“This is an administration of action and outcomes,” the governor said.

Reynolds has repeatedly praised the resilience of Iowans and she did so in the speech, but she described the scale of destruction from the August 10 storm as immense.

“Someone else had our back, our president,” Reynolds said. “When the winds had finished raging and the clean-up had only begun, he showed up…The day after the storm, the president called to assure me that we had the full backing of the federal government.”

The governor’s remarks, which were recorded earlier in Des Moines, began by explaining the extent of the damage.

“A storm called a derecho with hurricane-force winds of up to 140 miles-per-hour wiped out millions of acres of crops, left thousands without power. It destroyed homes, wrecked lives and left devastation in its wake,” Reynolds said. “It was the worst storm in our state’s history.”

Reynolds said the president’s major disaster declaration will help Iowans get “back on their feet” after the derecho. She also mentioned the federal aid Trump approved for Iowa in 2019 after Missouri River flooding. Reynolds described the Trump action and outcomes.

“So whether it’s providing needed relief to farmers who were the target of China’s unfair trade practices, hammering out new free and fair trade deals or fighting for workers and small businesses who were hit hard by Covid-19, we have a president and a vice president who get things done,” she said.

In addition to declaring the Iowa derecho a major federal disaster, Trump has OK’d federal aid to homeowners, renters, and businesses in Linn County. The governor’s request for federal help to individuals in 26 other counties is pending as state officials confirm and revise initial damage estimates. Earlier today, Reynolds told reporters in Cedar Rapids damage in some of those counties may not rise to a level to qualify for FEMA’s individual assistance program.