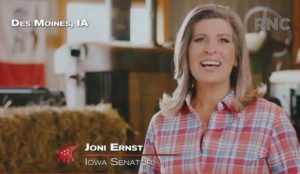 “If you don’t live in Iowa, you may not have heard much about it at first,” Ernst said. “While reporters here in the state were in the trenches covering the equivalent of a Category 2 hurricane, most of the national media looked the other way. To them, Iowa’s still just fly-over country.”

Ernst’s speech was recorded in Des Moines, according to information displayed on the screen. In some parts of the video, viewers saw photos of storm damage as Ernst described the devastation to homes, businesses and farms. The video also featured a photo of Trump hosting a discussion with Iowa officials at the Cedar Rapids airport last week.

“For years, I’ve worked closely with the president for farmers in Iowa and across the country,” Ernst said.

“This is something the Obama-Biden Administration failed to do in eight years,” Ernst said. “In fact, I can’t recall an administration more hostile to farmers than Obama-Biden, unless you count the Biden-Harris ticket.”

People on the Trump Campaign email list received a fundraising message from Ernst two hours before her speech was played at the convention. Ernst described Trump as “fearless” and the “hero we need” in the email. Ernst concluded her speech by saying a Biden-Harris Administration would take the country down the wrong path.

Ernst is running for reelection to a second term in the U.S. Senate and she used the opening minute of her short speech to sketch out her biography.