You are here: Home / Fires/Accidents/Disasters / Fairbank man injured in accident with horse-drawn rake 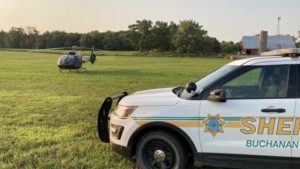 A Fairbank man was injured when he was run over by a horse-drawn rake Tuesday night.

The Buchanan County Sheriff’s Office says they received a 911 call of an injured male in the 1300 block of 150th Street southeast of Fairbank around 6 p.m. According to their investigation, 57-year old David Stutzman was using a horse-drawn rake when he fell and the rake went over him.

Stutzman suffered serious injuries to one of his legs and was airlifted from the scene to the University of Iowa Hospitals and Clinics.