You are here: Home / Fires/Accidents/Disasters / Grain elevator in Royal explodes, no injuries reported 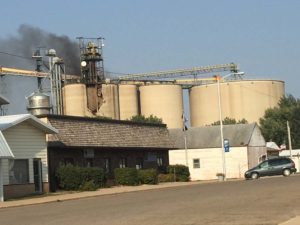 An explosion damaged a grain elevator in Royal.

Investigators are looking into the cause of a grain elevator explosion in northwest Iowa’s Clay County on Tuesday afternoon.

People living near the Ag Partners elevator in Royal were evacuated, though no one was reported hurt. Royal resident Richard Green was inside a gas station when the blast occurred while a state inspector was just outside looking over the gas pumps.

Clay County Sheriff Chris Raveling says it’s still not clear how safe the elevator building may be to approach. “We put some water onto the fire because there were some pieces of the structure that were wooden and they were burning and we got that put out,” Sheriff Raveling says. “We’re waiting for a structural engineer that Ag Partners called to come and assess the situation and then we’ll go from there.”

No one was inside the elevator at the time of the explosion. Witnesses say the entire downtown shook and windows rattled. Authorities conducted safety checks door to door.