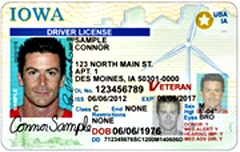 The race to get in line so you can be one of the first served when the state driver’s license stations open is going to be a thing of the past.

The DOT’s Motor Vehicle Division director, Melissa Gillett, says the appointment only system instituted when the pandemic broke out is going to be permanent.  “What we found is that we’re able to produce just as many credentials, license, and ID’s statewide with our appointment model as we had with the walk-in model,” according to Gillett. “And our appointment model provides a much more positive customer experience for the customers as well as our employees.”

She says the coronarius-forced appointment system proved it could be done. She says they were producing 17 to 20,000 licenses and ID’s statewide each week and in the last few weeks they have consistently produced 18,000 credentials each week. “In some locations, we are able to produce even more than we had precovid.”

Gillett says it takes the guesswork out of the process for everyone. “So we know who to expect, what types of transactions are going to come in the door that day. And it gives our customers that predictability also knowing that they have a scheduled time and they are able to get in and out in minutes instead of that unknown wait time that they faced before,” Gillett says.

She says you simply go to iowadot.gov. “Customers can go online and they schedule an appointment with us. They’ll receive an email confirmation. And that email has a Q-R code in it as well that you can scan on our equipment when you arrive and that will get you checked into our system for your appointment,” she says.

Gillett says the system still gives them some flexibility. “If you arrive a few minutes early — that’s okay –we can get you checked in. And depending on if the person ahead of you maybe didn’t show up, we would go ahead and serve whoever is kind of next in line. And what we’ve found is that we are able to keep on schedule,” Gillett explains.

If you show up late for your appointment, you may have to wait a while longer, but she says they will work you in. The slips you got that told you which number you are in line are not completely going away.

“The equipment that produces that number — that equipment will still function electronically, so it checks you in electronically,” Gillett says. “In some locations, it still is spitting out a ticket so that you have that conformation knowing when you will be served. That’s happening in our larger locations.”

Gillett says the suspension of the license renewal regulation will soon end. She says the first disaster proclamation in March gave you a grace period 60 days prior to the proclamation — so if your license expires from January 16th through September 20th — it is still considered valid. Gillett suggests you don’t wait to come in until September 20th if you fall in that timeline — as there would be a backlog of people seeking a renewal.