Department of Criminal Investigation Special Agent in Charge, Nate McLaren, leads the task force and says their new dog helps them find hidden electronic storage devices. “Micro SD cards, flash drives, things of that nature that are very easily concealable, that’s the purpose of the dog The dog can pick up on the scent,” McLaren says.

He says the material used to make the devices give off a distinct scent. “Kind of like a drug dog that picks up on the scent of drugs. This dog will pick up on the scent of the chemical compound that is attached to any electronic storage device,” according to McLaren. “A micro SD card about the size of your pinky nail and can hold up to 500 gigs. And I think they have one terabyte micro SD cards — she can identify that. And these dogs can do that.” 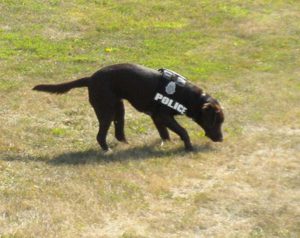 Mousse indicates a hidden storage device in a demonstration.

The chocolate lab named Mousse recently identified a cellphone that was in the water nearby while out on a walk with her handler. McLaren says the task force has seen an increase in the number of attempts to sexually exploit kids online.
“More recently since the COVID outbreak and the shutting down of schools and businesses — we saw an uptick — actually a very dramatic uptick in cases that came into us through the National Center for Exploited and Missing Children,” McLaren says.

He says sexual predators knew kids were spending even more time online. “Once the schools closed down we noticed this dramatic increase,” McLaren says. “We figure more kids are online there’s more applications they are using and there were individuals who are maybe preying on our children or predators online knew this and they recognized — hey more opportunities for us to make contact with these children. And then we saw the gradual decrease starting in around May as activities were starting to open back up and then we kids were getting back out and doing things.”  McLaren says they’ve received an average of 178 cyber tips each month in 2020.

He says they got Mousse with a grant from Jordan Detection K-9, which trains the dogs. He says they also hope to get her certified as a therapy dog. “Maybe after her first year of service so that she is fully trained, she’s fully entrenched in the task force,” McLaren says. “But she has been to Child Protective Services, interviewed with a child, the child wanted a dog present during the interview. So, she sat through the interview with the child. She’s gone out to injured officers’ residences to visit with them.”