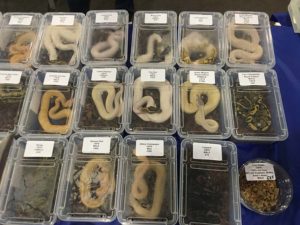 An international animal welfare group warns people to avoid a weekend event in central Iowa that features a wide array of lizards, snakes, spiders and other exotic creatures.

Ben Williamson, programs director for World Animal Protection, says the Iowa Reptile Show in West Des Moines promotes selling animals that should not be kept as pets, but it also poses a “major threat” to people, especially during the pandemic.

“Not only can these wild animal markets cause untold animal suffering, but reptiles endanger human health through the transmission of zoonotic diseases,” Williamson says. “These are diseases which pass from animals to humans. Zoonotic diseases are responsible for over two-billion cases of human illness each year.”

The organization is urging county and state health officials to take action against the event’s organizer, Cold Blooded Expo, while it’s also asked the Hilton Garden Inn in West Des Moines to cut its ties with the event. “Even healthy reptiles can carry bacteria, such as salmonella, that make people sick and especially young children,” Williamson says. “Children under five should never come into contact with reptiles, however, in a somewhat twisted irony, that’s the exact demographic that Cold Blooded Expo lets into its venues for free.”

Williamson says it’s “inconceivable” this event would be held while Iowa is still seeing increases in the number of COVID-19 cases. Such shows ended in the early months of the pandemic but started to reappear in May, he says, and are now being held almost every weekend. “We were so surprised that when we’re still in the middle of a national pandemic, that any venues would consider hosting these moneymakers where wild animals will be held and touched,” Williamson says. “Epidemiologists believe that wild animals were the source of, or at least contributed to the spread, of COVID-19.”

While COVID-19 is believed to have started many thousands of miles away in China, he says the conditions of live animals being confined together in close proximity to humans are remarkably similar to those at reptile markets like this one. “There’s no evidence that we know of that reptiles can transmit COVID-19 at the moment,” Williamson says, “but aside from the zoonotic disease risk, people need to ask themselves if they want to attend an event which is largely indoors and which is full of people from different areas.”

Founded in the 1950s, World Animal Protection is an animal welfare organization with offices in 14 countries.