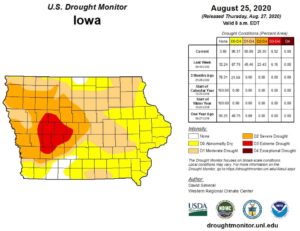 There hasn’t been much rain in the last week for those areas of the state facing drought conditions.

Iowa DNR analyst Tim Hall says that’s led to a slight worsening of the situation on the drought monitor. “A little bit of expansion of the total coverage of the dryness and drought. Fortunately no expansion, significant expansion of the D-3 extreme drought — and no introduction of any D-4 (exceptional) drought. In that regard it is similar to what it’s been in the last few weeks,” Hall says.

He says the longer the drought continues, the tougher it is to pull out. “That really extreme drought part of the state is eight or ten inches short –so you almost think of it as we have to fill in that shortage just to get back to where we should be,” he says. “So it’s’s going to be tough to do that as we move from the wetter summer months into what are typically drier fall months.”

Hall says the National Oceanic and Atmospheric Administration has a prediction that is positive for Iowa. “And they are showing Iowa to either be in an area that is called ‘drought removal likely’ or ‘drought remains but improves’, so they are predicting from here into November we will likely see removal or improvement of drought conditions,” according to Hall. He says the fallout from the most recent tropical storms veered away from Iowa, but there could be others that bring in moisture.

Hall says this drought is not yet as bad as the most recent severe situation. “Right now we have about six and half of the state in D-3. Back in October of 2012, we had over three-quarters of the state in D-3,” Hall says. He says that does not diminish the problem for those in the center of the drought.

“Yes it is a significant drought issue — especially for those people in the midst of the Carroll, Audubon, Guthrie County area, that D-3,” Hall says, ” but in comparisons to October of 2012 when conditions were at their worst in the midst of the severe drought — we’ve got six percent versus three-quarters of the state.”

Hall says we came off of two wet years heading into this year and that built a sort of a cushion that helped keep the current drought from getting worse.