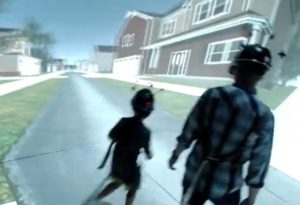 A simulator was used to study kids crossing the street with parents.

A University of Iowa study finds kids learn to be better and safer at crossing busy streets when they have hand-in-hand help from their parents.

Study author and lead U-I researcher Elizabeth O’Neal says it’s not as easy as saying, “Look both ways before you cross,” as there are many nuances and skills that have to be mastered, especially in city traffic.

“Younger children aren’t quite as good at timing their entry into a traffic gap,” O’Neal says. “They tend to delay their entry into that gap and what that results in is less time to spare when they exit the roadway. As kids get older, they get better at this.” 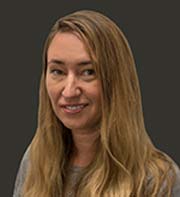 “Parents will go, ‘Hey, what do you think about going after that red car?’ and what that does is it gives children some time to prepare their movement before they go into the gap,” O’Neal says. “That resulted in tighter timing of entry for those kids and more time to spare at the end of the crossing.”

Children in the study ranged from age six to 12. O’Neal says the younger the child, the more challenging the situation became on the virtual street. It’s much like trying to learn how to catch a baseball or kick a soccer ball, she says, as the eye hones in on a moving object.

“Kids have to make predictions about where those moving objects will be in the future in order to plan their movements accordingly,” O’Neal says, “and that’s difficult.” O’Neal, a postdoctoral researcher in the U-I Department of Psychological and Brain Sciences, says this is an important, real-world skill and the study found kids learn best by example from their moms and dads.

“Parents have a really important role to play here,” O’Neal says. “By helping children to learn to anticipate when the gap will arrive and when to prepare their movements, they can help their children become safer crossers.” The U-I study was published in the journal Child Development.

The National Center for Injury Prevention and Control reports more than 175,000 children between the ages of one and 14 were injured as pedestrians during 2018 alone.

Here’s a video of the simulation study: