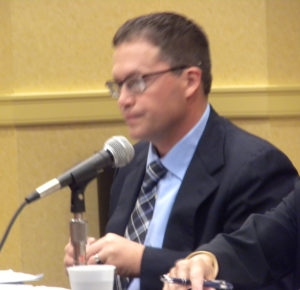 The Iowa Racing and Gaming Commission approved a revision in security plans for some casinos to allow them to cut back on the number of officers on duty as attendance has been down.

Racing and Gaming Administrator, Brian Ohorilko, says the plans were set for the new fiscal year that began in July before knowing the impact of the coronavirus. “Those plans typically outline the number of security officers that each facility has (and) when those security officers are present. And those numbers fluctuate depending on how busy a facility is,” Ohorilko.

He says some casinos simply don’t need as many security officers on hand as they have not had concerts or restaurants and other facilities at the casino site aren’t open. “There are variations depending on where these facilities are located — but overall we’ve seen a decline of approximately 25 to 30 percent year over year,” Ohorilko says. “It is still early and I think we are just not seeing a lot of the more casual gamblers or folks visiting the casinos to take advantage of the amenities and restaurants.”

Ohorilko says the casinos are still holding their own despite a drop in customers. “A decrease in admissions should not be confused with the revenue. At this point, the revenue is still holding in there and nowhere near the decline that we’ve seen in regard to the admissions,” according to Ohorilko.

Gambling revenue at the 19 state-licensed casinos in July was down 3.7% — or around $4.7 million compared to July of last year. Attendance was down by 569,507 in July compared to last year. Casinos reopened on May 31st after being shut down on March 17th.